Ending four years of Nazi occupation in 1945; during which censorship, curfews, and alerts practically suffocated all theatrical creation; the liberation uncovered a pot about to boil over. New and exciting voices are beginning to explore the void, absurdity, and then turn towards parody. As a result of this creative explosion; small theatres such as the Vieux Colombier, the Noctambules, the Latin Quarter, Theatre Babylone, etc. begin opening all over Paris, particularly in the Latin Quarter.

One evening in September 1947 Georges Vitaly wanders through the Latin Quarter. This 30 year old Russian in exile has just won the Grand Prize of the 1947 Young Company competition with Le Mal Court; this play has also made a name for both the playwright, Jacques Audiberti, and an actress, Suzanne Flon. His next project is to put on Les Epiphanies by Henri Pichette and is to star Gérard Philipe and Maria Casares. Vitaly was in search of a place to pursue his theatrical ambitions.

A hand made theatre

In the middle of the street la Huchette, behind a half-raised metal shutter, Vitaly sees a pair of legs with big feet behind a wheelbarrow walking up and down a small incline. Vitaly looks under the shutter and comes face to face with Marcel Pinard, and old classmate from drama classes.

It is said that Pinard who was a ploughman in Saint-Jean-Saint-Germain was one day stuck with inspiration in the middle of his field, he would become the owner of a theatre.

He sold his land and moved to Paris. However, after Paupelix classes (private dramatic arts classes) he is unable to find work as an actor so begins working odd jobs. He is hired as accountant then a mechanic, a door-to-door insurance salesman, and even in the shows at the Folies-Bergère hoisting the women in the air before transitioning to dry cleaning. During all this he does not forget his dream of going on the stage and eventually decides to take matters into his own hands. At the time he is seeing a woman named Marie-Thérèse Desportes, owner of the building at 23 rue de la Huchette. She also owns the store on the ground floor and agrees to let it out to her lover, known only for having formerly housed Le Caucase an Arminian restaurant held by the parents of singer Charles Aznavour. There are also unsubstantiated stories of monks from Saint-Severin having buried treasure in the cellar and of a witch using the locale to preach a new religion founded on esoteric necromancy.

Pinard and Vitaly quickly come to an agreement; the former will lease the theatre to the latter for one symbolic franc, in return Vitaly must get the theatre in working order. This means acquiring an operating permit, financing the technical installations (e.g. projectors, seats, heating) putting together a real artistic policy, as well as finding and hiring actors…

It is the beginning of an adventure that lasts five years from 1948 to 1952 and will produce some of the theatre’s classic works of the second half of the 20th century. : This includes the plays La Fête Noire and Pucelle by Jacques Audiberti, La Quadrature du Cercle by Valentin Kataiev, M. Bob’le by Georges Schéhadé, Edmée by P.A. Bréal, La Belle Rombière by Guillaume Hanoteau… It is during this period that some of the country’s future great actors will grace this small stage; such as Jacqueline Maillan, Claude Gensac, Monique Delaroche, Pierre Mondy, François Chaumette, Jacques Fabbri, Michel Roux, etc.

The Theatre de la Huchette soon becomes too small for this fiery troupe director. Beckoned by all the stages of France and Navarre, Georges Vitaly finally leaves for the Théâtre La Bruyère where he will make the works of Jacques Audiberti known to the world.

Under the sole direction of Marcel Pinar the theatre resolutely commits itself to maintaining a repertoire of contemporary works. Ionesco is already a regular in the theatre with Sept Petits Sketches put on in 1953, Le Tableau and Jacques ou la Soumission put on in 1955 with Jean-Louis Trintignant, Tsilla Chelton and Reine Courtois in the cast. 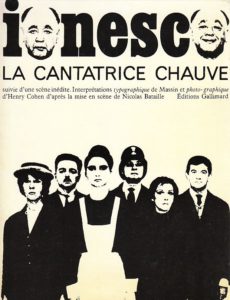 February 16, 1957 is the historic date on which Ionesco’s first two plays La Cantatrice Chauve and La Leçon are permanently united. This run, financed by film-maker Louis Malle, was supposed to last only one month. However; week after week, month after month, year after year the theatre does not empty. Marcel Pinard is even able to buy a piece of land in the country and go on holiday. The troupe performs all over the world, and the Ionesco Show inspires artists such as the photographer William Klein and the graphic designer Massin. In 1965 the theatre’s actors form a cooperative “Les Comédiens Associés” in order to manage this never-ending success.

It is in 1975, in the theatre’s tiny ticket office that Marcel Pinard is struck down by a heart attack. The troupe’s fight to keep the theatre from being sold and turned into a restaurant for tourists will last five years. It is finally in 1980, after a lengthy legal struggle and when the theatre has been rundown into a pitiful state, that twenty-two actors form the LLC “Théâtre de la Huchette” in order to take back the management and assume leadership of the theatre.

“In taking this kind of action,” emphasized the theatre’s former director Jacques Legré, “Our aim was to save a place that, in the present context, was condemned to suffocation by its own small size; save a show that has become an institution; as well as turn the Theatre de la Huchette back into a place of creation and innovation.” It is for this reason that since 1981 a third show is presented every evening at 9:00 pm after Ionesco’s plays.

Two plays that are today still billed at the theatre, half a century later continue to attract a full house.

It is a phenomenon of longevity unique within the world of theatre. The Ionesco Show holds with 56 years of uninterrupted performances the world record of the show that has played nonstop in the same theatre.