The Ionesco shows / The place / Creations 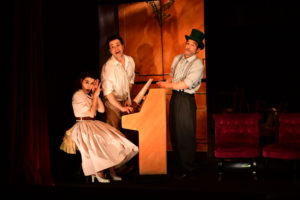 In 1952 when Marcel Pinard took over as sole manager of the theatre he continues in this direction, presenting the plays of authors such as Eugene Ionesco and Jean Tardieu until La Cantatrice Chauve and La Leçon become permanent acts.

Following the death of Marcel Pinard in 1975 and after a merciless struggle led by the director Jacques Legré and his administrator Françoise Alessandri, the Ionesco Show troupe takes over management of the theatre and creates the SARL « Théâtre de la Huchette ».It aspires to see its theatre become once again place of creation and innovation. Nicolas Bataille and Marcel Cuvelier are appointed the directors of this new era. It is for this reason that since 1981 a third show is presented every evening at 9:00 pm after Ionesco’s plays.

Since the passing of Nicolas Bataille and the artistic retirement of Marcel Cuvelier director Jean-Noël Hazemann has maintained this policy and continues to offer the public new, original works.

From 29 september
The famous novel by Octave Mirbeau now on stage. In french only. No subtitles for this show.

Last performance 02/01/2022
A (musical) romantic comedy
As the Brexit campaign is in full swing, the heart of a young female video-game writer is torn between a Frenchman and an Englishman. Meanwhile her life borrows a similar path to that of her role model, Alienor of Aquitaine.

Every monday at 7 p.m.
A young woman falls madly in love with a man.
One night, she seals a pact with a strange Lord: never forget her name and her Love will then be granted.
But the name will soon burn her lips.